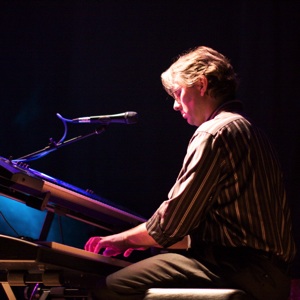 Mark is a 1990 graduate of the Berklee College of Music. While pursuing a major in Music Production & Engineering, and studying traditional theory and jazz harmony, Mark augmented his music-industry experience by taking on the role of production director for the ASCAP Award-winning New England Philharmonic Orchestra under music director and conductor Jeffrey Rink.

Mark also took time to develop his vocal skills by serving as a tenor in Berklee’s Concert Choir, as well as singing liturgical music in Roman Catholic Church choirs in both Massachusetts and New Jersey. Soon after leaving Berklee, he joined up with Alan and Henry as Advent’s second keyboardist.

Influential bands? Well, besides his “big three” (Gentle Giant, Genesis, and Procol Harum), Mark enjoys groups such as Ambrosia, The Tubes, Utopia, and Weather Report, though he does admit these days to listening to more “long-hair” music. In this world, his favorites include Bach (especially organ music), Schubert (piano music), Haydn (organ masses), and various works by Elgar, Ravel, Rachmaninoff, and Bartók. “What I really am attracted to, though (no matter what the style or genre), are musical ideas that sneak up on you and make you think—you know, like puzzles or word games. When a piece of music speaks to me in this way, I get a real charge out of it. Discovering it is almost like finding a buried treasure. And then, just like a Hitchcock movie, you almost wish you hadn’t found it so you could go back and experience the suspense again.”