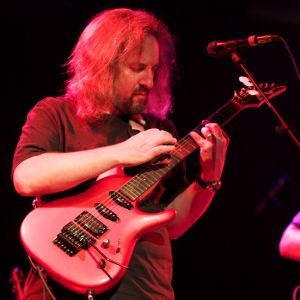 A lifelong musician who first studied piano at age three, switched to violin several years later (playing in two New York City orchestras), and picked up several other instruments in between, Alan experienced his first serious encounter with the guitar at age 14 upon being prevented from bringing his violin to boarding school. Taking to the instrument quite naturally, he quickly formed the school’s most popular rock band—Amber—who later went on to record a professional demo under the technical supervision of engineer Les Paul Jr.

Later that year, at age 16, Alan attended a semester at the renowned Berklee College of Music in Boston, Mass. Impatient with the first-year curriculum, he left to seek experience in the real world, which soon led to an 18-month stint playing clubs in the Philadelphia-based band Merlin. In the late 1980s, Alan recorded several solo pieces (playing all instruments himself) and also received advanced guitar instruction from jazz-rock maestro Glenn Alexander. Shortly afterward, he met up with keyboardist Henry Ptak, and Advent was born.

In addition to maintaining a full-time commitment with Advent, Alan joined (the newly re-formed) Mirthrandir—one of the most respected independent progressive acts from the 1970s—in October of 2005. The band has since been enjoying a string of highly successful performances that kicked off at the New Jersey Proghouse (in February of 2006) and went on to include major festivals such as Baja Prog, RoSfest, and ProgDay.