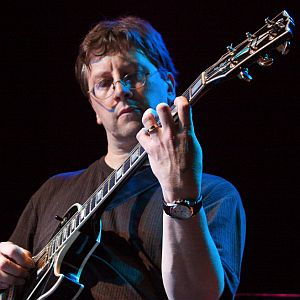 Greg started studying the guitar at age nine and shortly thereafter discovered two musical forces that were to shape the direction of his playing and listening for the rest of his life. “One was the music of classical guitarist Andrés Segovia, in which I began to see what the guitar could be in the hands of a virtuoso.” The other was Genesis.

“Alan Benjamin of Advent recently attended a performance of my Genesis tribute band, Foxtrot, and a week later I received a call asking if I would like to join Advent. After listening to their two wonderful CD releases, I quickly agreed!”

Though Greg retired from live performance in 2009, he remains a very active and creative member of Advent in the band’s studio endeavors, both in terms of writing and recording.