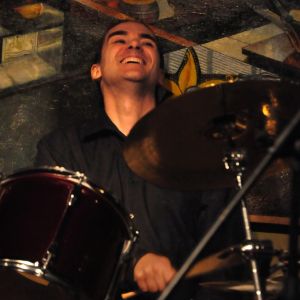 A lifelong New Jerseyan, Joe grew up listening to music incessantly. From singing with the local choir to dissecting countless songs—and playing in everything from rock bands to orchestras—Joe developed a healthy appreciation for musical genres of all kinds. At college in Hoboken, Joe continued to embrace musical opportunities, first as a glee club tenor/soloist, and later as a jazz-ensemble drummer. Initially self-taught, Joe has studied violin with Nadia Koutzen, piano and theory with Harold Van Hise, musical theater with Faith Kline, and drum rudiments with Tommy Igoe.

Joe considers his 20-year association with “touch-style” player/multi-instrumentalist Ray Ashley among his fondest memories. Along with Ray, he has had the privilege of sharing concert lineups with artists such as Project/Object, Bon Lozaga, Dark Aether Project, Greg Howard, and Mike Keneally. Joe continues to perform with local musicians, having logged numerous hours at concerts, on-air sets, and festivals throughout the northeast US—and has also been on stage, behind the scenes, and in pit bands for a variety of New Jersey area theatrical productions.

In approaching the drums, Joe brings an orchestral, sometimes driving, always dynamic aesthetic. He enjoys moments of “lyrical synchronicity” and is not averse to singing or harmonizing while behind the kit. Through his impromptu session work and live shows, Joe has earned a reputation as a quick study who is always eager to push boundaries. Elsewhere, Joe can be heard on studio recordings by Broadside Electric, Three Hour Detour, Mike Agranoff, and Ken Galipeau.